Monument of battle in Batina

Memorial complex of Battle of Batina was opened in 1976 as a symbol of remembrance of Battle of Batina's participants, from november 1944. It consists of monument to the Red Army called "Victory", erected on site of fiercest battles (so called "krvava kota 169"), Memorial home with two galleries and a permanent museum exhibition about Battle of Batina and Memorial park and shared tomb with the remains of 1297 Red Army fighters. Monument "Victory" is an imposing obelisk, erected in 1947 on "Gradac" plateau, and it measures 26,5 meters in height. The monument consists of three parts. First part is the middle pillar that has a five pointed star base with five sculptures, and a bunch on the front, cast from copper, that represents Red Army's figthers charging. From the bigger plateau leads 27 steps to the smaller plateau, that holds bronze figure "Victory", seven metres tall. "Victory" holds a torch. Underneath the monument is a large ossuary that contain the remains of 1297 fighters. 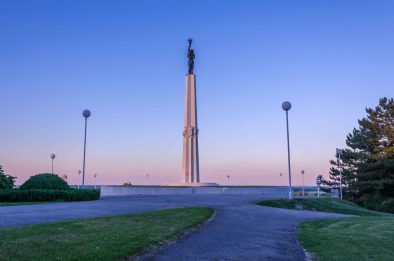